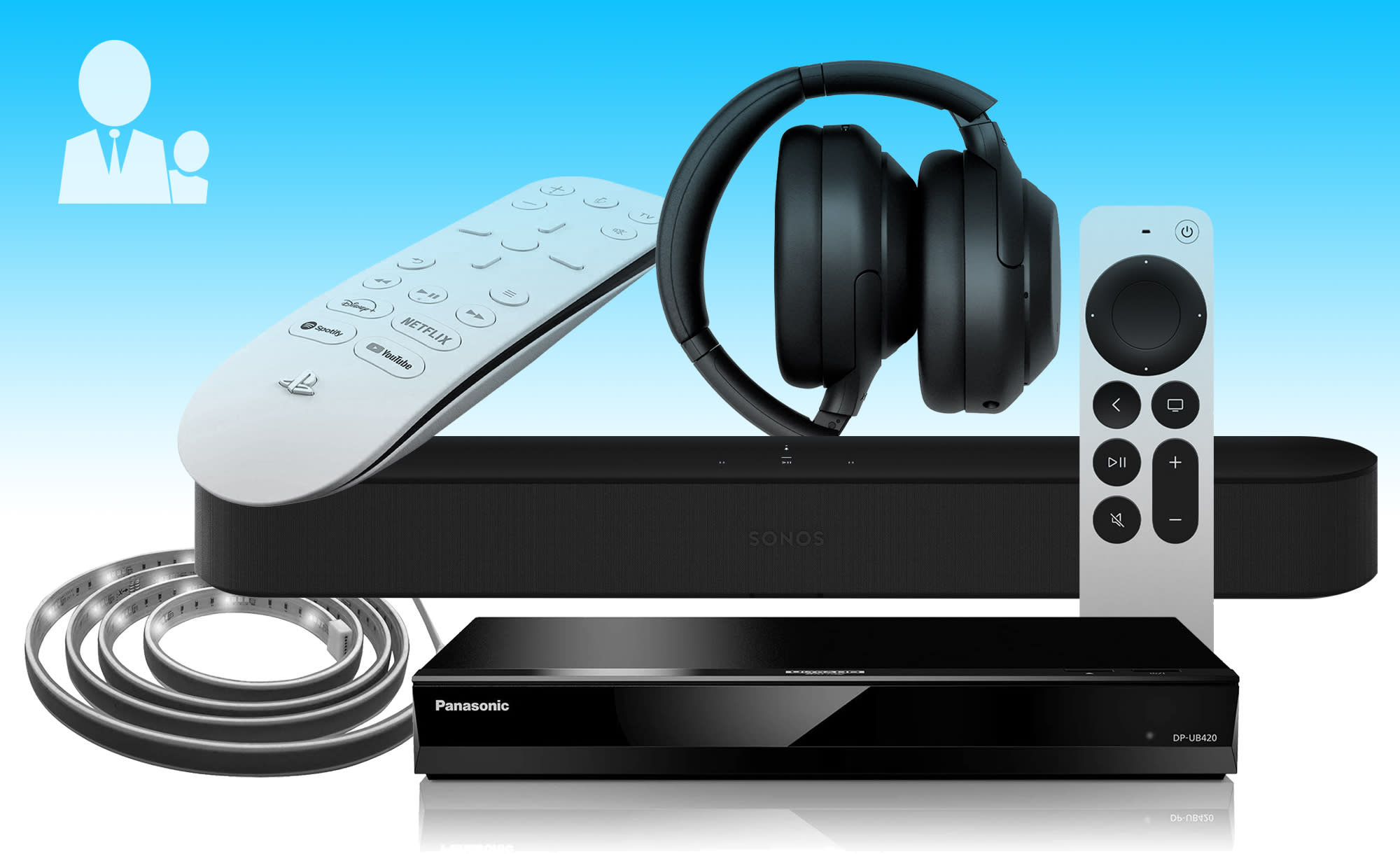 Engadget
@engadget
June 3rd, 2021
In this article: thebuyersguide, apple, gear, benq, C by GE, entertainment, feature, panasonic, LG, sonos, commerce, fathersdaygg2021, roku, sony, TCL, streamshopping
All products recommended by Engadget are selected by our editorial team, independent of our parent company. Some of our stories include affiliate links. If you buy something through one of these links, we may earn an affiliate commission.

Parents of young kids just need a break. Even before the pandemic, it was tough to run out to the movies, since that involves setting up a baby sitter and praying nothing goes wrong in the middle of your night out. Thankfully, it's pretty easy to help new dads (and moms) build out their home entertainment options. And it’s even easier if you're aiming to find gifts for someone who hasn't already nerded out on A/V gear.

There are plenty of soundbars out there, but few are as versatile as the Sonos Beam. It's a sleek box that'll instantly upgrade any TV with expansive and detailed sound. But, it's also a smart speaker with support for Amazon Alexa and Google Assistant. That makes it a viable alternative to devices like the Echo. Being able to shout "Play some Sesame Street songs!" comes in really handy for new parents. Trust me. — Devindra Hardawar, Senior Editor

These days, it's almost impossible to buy a dumb TV without any internet connectivity or streaming apps. But for folks who have older sets, especially those relegated to bedrooms, a streaming stick like Roku's could change their lives. It offers the company's full suite of apps, excellent 4K and HDR performance, and it's surprisingly inexpensive. And once we can start traveling again, the Roku Streaming Stick+ is great to bring on vacation, so you're never too far from your bingewatch queue. — D.H.

The Apple TV 4K finally gets the update it needed this year — and best of all, it has a larger Siri remote with a more responsive, touch-enabled clickpad. It's a solid gift for anyone already embedded in the iOS ecosystem. This latest model also features Apple's A12 Bionic chip, which offers faster video decoding and support for Dolby Vision HDR at higher frame rates. And if you know someone who already has the previous Apple TV 4K, you can always gift them the new Siri remote separately for $59. — D.H.

If your dad (or anyone else) is in desperate need of a living room TV upgrade, then you can’t go wrong with LG’s award-winning OLED TV from last year. Its 2021 successor arrived with a new remote and some tweaks around the edges, but the 2020 model has incredible picture quality and a long list of features that will keep it current even when you plug in a new-gen game console.

The best part? For as long as the CX is still available, you’ll be able to find some good deals, with prices almost as low as they’ve ever been since these TVs debuted a year ago. When we recommended this TV as part of our holiday gift guide prices hovered near $2,000, and today they can be found for around $1,350. Don’t wait. — Richard Lawler, Senior News Editor

Rising LCD prices mean it’s hard to find a bargain on cheap TVs, but even at its current price, TCL’s current 6-Series LCD is still an impressive value. With a redesigned stand it’s easier to fit into your living room than previous models, and it now includes mini LED backlighting technology to provide premium quality-level local dimming and contrast at a mainstream price. Thanks to the built-in Roku OS, it will probably be very familiar to use so you can spend more time catching up and less time doing tech support. — R.L.

If your dad just needs to spend time with an audio book or some music, then a pair of noise-cancelling headphones are a good match and this Sony model provides some of the best technology around. The latest model can connect to multiple devices at the same time, so it will work with dad’s phone and computer without constantly needing to re-pair and cause more hassle.

One of the few knocks we could find on the XM4s during our review was their high price, which has dropped noticeably since their release. They have a good fit, and can automatically pause when the wearer starts talking — he’ll appreciate that. — R.L.

If your entertainment runs through a game console, and dad just wants to kick back to watch a game or some Blu-ray discs, then he’ll appreciate navigating things with a remote instead of a gamepad.

The PS5 Media Remote matches your console aesthetically, and includes shortcut buttons for several popular apps. Plus, its batteries will last longer than the one in a DualSense so it will always be ready to go. Your biggest problem could be probably finding one in stock, although if you managed to snag the console then we think you’ll be able to figure this out too. For Xbox owners, the PDP Talon remote works for systems from the One through the new Series X/S. Instead of shortcut keys it includes a fairly standard universal remote setup so that there’s not a lot of re-learning involved. — R.L.

Whether the house is already leaning into automation or not, this starter kit of C by GE lights should be a good match to whatever technology is already present. With an LED strip and connected smart bulbs, everything in this starter kit is ready to match whatever content is going on the big screen, all commanded by the dimmer switch or the smart home assistant you set your dad up with last year. Finally, the smart plug can help connect anything else in the room that you might want to turn on/off with a simple voice command. — R.L.

For the biggest and best screen possible, you’ll always want a projector. The BenQ HT2050A is as good of an option as you’ll find, and your dad can brag about how much of a deal it was at just $750. What this 1080p projector lacks in resolution and dynamic range it more than makes up for in value, and is a perfect choice to get someone started on live the projector lifestyle. Just find a blank wall and pop this on a table for an incredible movie or game night with a few vaccinated friends. A proper projection screen, blackout shades and seating upgrades are follow-up gifts that everyone will get to use. — R.L.

Blu-rays and DVDs aren't dead yet. For the true cinephile in your life, consider a 4K Blu-ray player like Panasonic's UB420. It'll playback UHD discs at full resolution, and it includes support for HDR and HDR10+. While many 4K Bluray owners rely on their gaming consoles, having a dedicated player is a major upgrade in terms of speed and usability. (Plus, it's just a pain to control movies with a gamepad.) As a bonus, you'll also be able to play back your older discs at an upscaled resolution. Sure, it costs a bit more than typical Blu-ray players, but it's a worthwhile gift for anyone who cares about the quality of their films. If you're on a tight budget, consider a Blu-ray player like the Sony S6700. It can upscale HD and DVD video to 4K, and it also has its own suite of streaming apps. Best of all, it's pretty compact, so it won't take up much room on your TV stand. — D.H.

No, we won't ever stop loving The Matrix. And the series looks better than ever with its 4K Blu-ray remaster, which fixes some egregious errors from the original Blu-ray release. Whatever you think of the sequels, The Matrix fundamentally reshaped action and science-fiction in Hollywood — mostly for the better. Thanks to a new Dolby Atmos soundtrack, the films also sound more immersive than ever. And really, what better gift is there for new dads than a series that wrestles with the nature of humanity? Bringing a new life into the world certainly gets you thinking, especially when the eventual outcome for civilization sometimes seems grim. — D.H.

While this box set is several years old, it's a worthy addition for any new dad's collection. Somehow, Tom Cruise willed the classic spy series back to life and has managed to keep it fresh and energetic over the past few decades. (I'll defend Mission: Impossible 2 as a staggering work of action opera any day, just come at me.) Consider them the ultimate dad movies: Stories about people who are great at their jobs, and almost always right in the face of insurmountable odds. — D.H.

Planet Earth II was the best example of 4K HDR we'd ever seen when it was released in 2017. Several years later, it still looks better than most 4K films. This combo set makes a great gift, since it also includes the sumptuous Blue Planet II, which focuses more on marine life. Dads will appreciate the incredible footage and soothing narration. Both series will also make you feel connected to the circle of life, which you can't help but be a part of when holding a child in your arms. — D.H.

The best camping and backpacking gear for dads

The best camera and photography gift ideas for dad